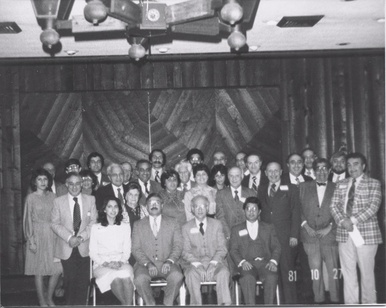 The morning of June 2nd 1981 was really no different than any other morning of a springtime day, except that on this day the Armenian American Pharmacists’ Association (AAPA) was conceived and had its inception and birth.

Learn More About Us

Reading this article and understanding what these particular groups were doing and attempting to accomplish, rather roused Partamian’s curiosity.  Partamian recalls commenting to himself that if these organizations can meet and have a purpose and goal, why couldn’t an association of Armenian American Pharmacists?

The following morning, Partamian took it upon himself to make phone calls to specific individuals he thought would make a formidable nucleus and committee with which the formation of this new organization could be formed.

The individuals contacted were: A. Richard Goolkasian, Larry Pahigian, Z. Robert Surabian, Elissa Karaian, Steve Karoghlanian, Steve Avedikian, Susan Krikorian, and Haig Jamgochian.  These individuals were requested to convene at a meeting on June 2nd 1981 at Fantasia’s Restaurant in Cambridge, MA for the purpose of forming this new association.

The convened group dealt with many issues that evening and each individual donated $10 to aid in covering the initial costs of operating and an initial mailing to recruit members.  Subsequent meetings were held in July and August, 1981 in anticipation of the formation and realization of this fine professional association.

The initial organizational meeting was held on a Tuesday evening, October 27, 1981 at the Kernwood Restaurant in Lynnfield, MA with cocktails and dinner following.  Present were pharmacists from all over the New England area that represented all phases of the pharmaceutical profession.  By laws were adopted and officers for the ensuing term were elected at the assembly with the ultimate goal of a fruitful future for one of the professions fine organizations.  Officers elected that first meeting were as follows:

Various committees were also established at this first meeting to be perpetuated through the years.  They included the following committees with the first chairperson:

The initially elected executive committee remained in office by unanimous acclaim to lead the association in its infancy until the meeting of October 8, 1985 at which time a new slate of officers were elected to serve.

The AAPA had many outstanding speakers over the past years of its existence.  To name a few as follows:

…and many other outstanding speakers.

In May of 1984, the AAPA established a scholarship fund where it was awarded at its annual meeting to a deserving individual(s) as deemed by the scholarship committee.

It was a special day at the November 1987 annual meeting where there was also a testimonial in honor of Harold R. Partamian, founder and first president of the AAPA, and recently elected Executive Secretary/Director of the Massachusetts Board of Registration in Pharmacy.  The meeting was held at the Kernwood Restaurant in Lynnfield, MA and was attended by some 150 attendees representing all facets of the pharmaceutical profession as well as friends and relatives in honor of Harold Partamian.

Organizational meetings are and have been held biannually since the inception of the AAPA.  It should be noted that at every annual meeting, the AAPA made a sizeable donation to the Massachusetts College of Pharmacy and Health Sciences and the Armenian Nursing Home in Jamaica Plain, MA.